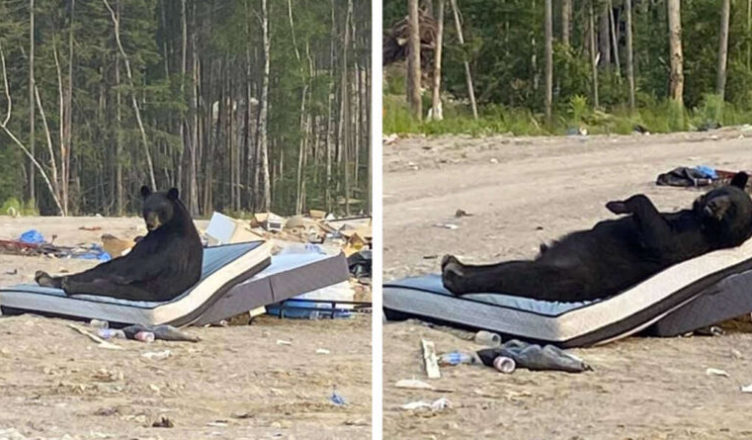 The other day, Keira Mamakwa was having a pretty busy day, tackling some tasks around her home in Ontario, Canada. One of her errands involved driving to the local landfill to drop off some junk.It was there that she saw a certain someone whose day was a bit more laid back.

Amid all that disposed-of trash, this guy had found a treasure.Pulling into the dump, Mamakwa noticed a random bear who’d emerged from the surrounding wilderness. Evidently, he’d come in search of a cozy spot to chill — which, sure enough, he’d found with little trouble.As it just so happens, another visitor had recently tossed out a perfectly good mattress.

And the bear wasn’t about to let it go to waste. While Mamakwa looked on in amazement, the bear settled in, absent of a care in the world.

The bear was taking a “me” day. (And it looks like he needed it.)

“I thought it was hilarious,” Mamakwa told The Dodo.

It wasn’t long before Mamakwa’s job at the landfill was done and she had to go onto the next chore. But the bear was apparently planning for a longer stay. By then, he was well on his way to grabbing a few Zs — making Mamakwa’s day in the process.

“It was an exciting thing to see,” she said.