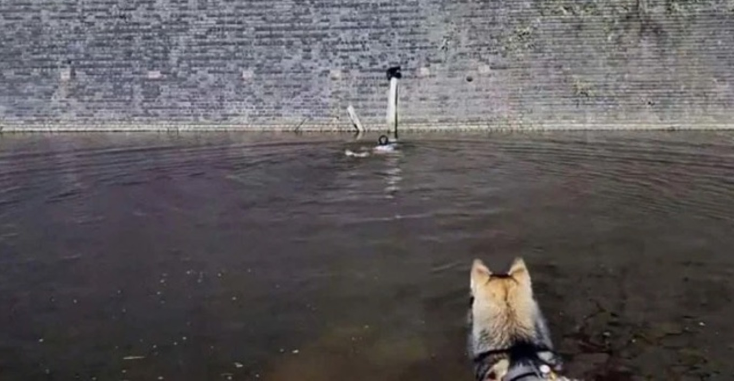 The cat was sitting on a stake sticking out of the water in the middle of the canal and crying loudly: the guy heard it. The young people were walking with the dog along the canal. Suddenly the animal froze, looked intently and barked.

At first, the guys couldn’t understand what the dog was seeing, but when they looked closely, they realized what was happening. On the other side of the canal, a cat was sitting on a stake in the middle of the water.

The poor boy mewed loudly and looked towards the men, hoping they would help him. Most cats are very afraid of water and would never jump in it, and John, who had a cat at home, knew that. The young man decided to save the cat.

Everyone who lives in big cities knows what all the tanks look like on the outskirts. Effluent is drained into this water, and most often many other things, and untreated ones throw out a variety of wastes that can be hazardous.

So, to voluntarily climb into such water, you have to be really brave. The cat was very lucky, because John was such a guy. He did not think of the dangers and possible consequences, because a cat was sitting on a pile that needed help.

The young man climbed into the water and walked towards the pile. The depth was decent, up to the neck and the bottom was something very mean.

Either way, John was able to reach the cat, pull it off the post, and carry it down. Alas, we don’t know the fluffy’s subsequent fate, since he fled as soon as he was on shore.