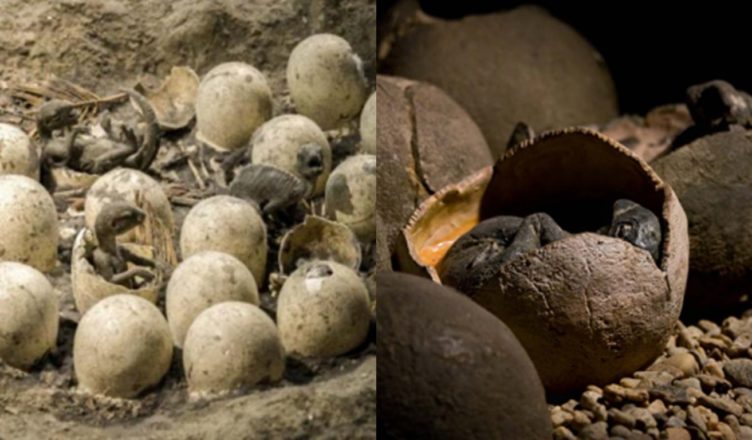 A 10-year-old boy in China who was out playing near a lake accidently unearthed a fossilized egg that led to the discovery of a very rare dinosaur nest that is 66 million years old. The find is just the latest in a city that has become famed for its number of dinosaurs finds, especially fossilized eggs.

The discovery was made in the city of Héyuán, in the province of Guangdong. Zhang Yangzhe was playing on an embankment, near the Dong River under the supervision of his mother when he made the find. According to Ladbible ‘‘he was trying to find something that could crack open walnuts’’. Zhang loves science and has always been fascinated by dinosaurs, so this was the find of a lifetime.

‘Strange Stone’ in the Soil

While digging in the soil, the boy saw a “strange stone” reports the Sun. The stone was buried in the red soil and he dug it up very carefully. The Daily Mail reports that ‘‘at first he thought the rock had ‘circles’ on its surface’’. His first impression was that it may have been a piece of cement. 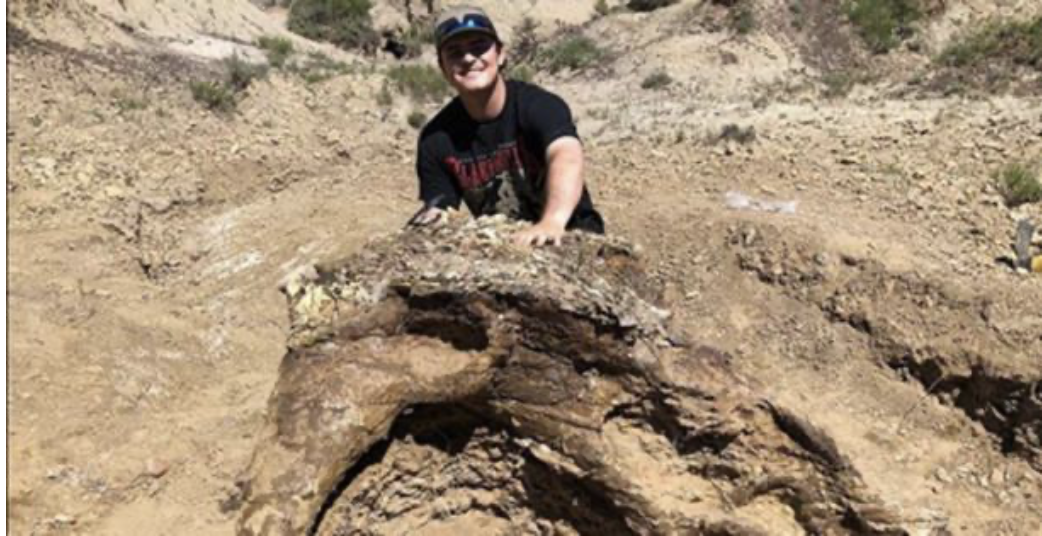 Upon further inspection, he knew that it was something unusual and suspected that it was a dinosaur egg, based on its particular shape. He told local media that ‘‘I have learned this knowledge in books and in the cultural corridor of the school” reports Ladbible.

He called his mother, Li Xiaofang to help him to understand what he had found, and she agreed that he may have found a dinosaur egg. They immediately contacted the local museum about their find and they both stood guard over the site until experts arrived on the scene and secured it.

The video below, which is Chinese, shows images of the scene and the discovery.

Nest of Dinosaur Eggs
Experts immediately confirmed that the strange stone was a fossilized egg. In the following days, they began to excavate the site where Zhang had made his discovery. During the dig, they found ten more eggs that were identical to the one discovered by the schoolboy.

They determined that Zhang had found a dinosaur nest because they were all unearthed in a small area. The fossils are approximately 3.5 inches (9.1 cm) in diameter. 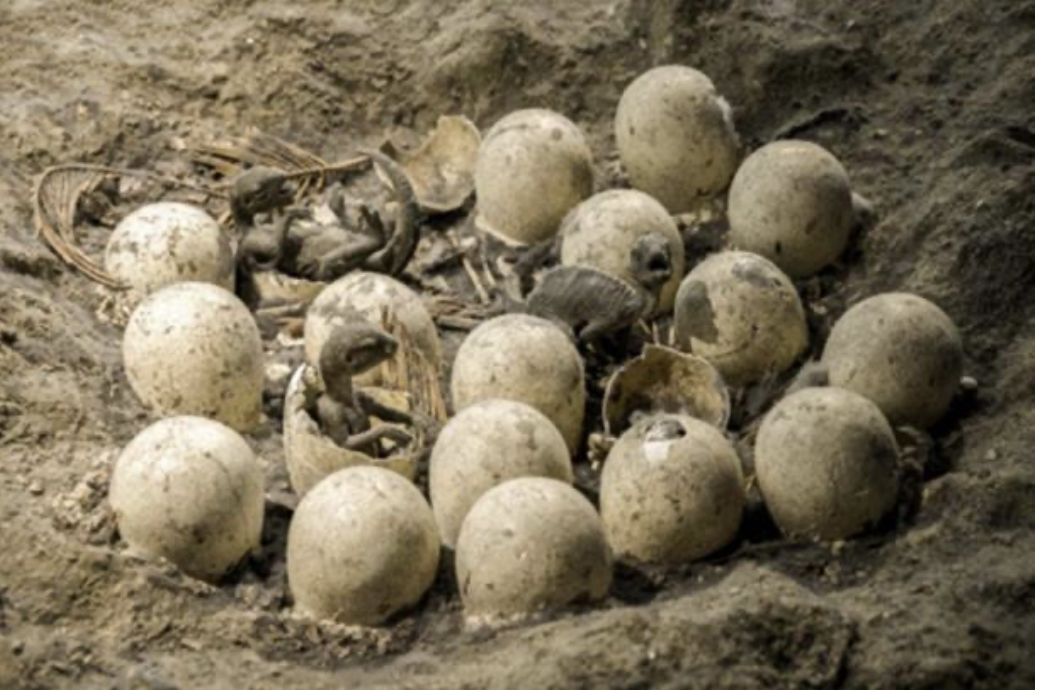 The experts have taken the eggs away for further examination at the local Héyuán Dinosaur Museum. They are believed to be an astonishing 66 million years old.

Huang Ding, who formerly was a director at the local Heyuan Museum, stated that ‘‘that the fossils came from the late Cretaceous period’’ according to the Daily Mail . This was the era just prior to the mass extinction of the dinosaurs, about 65 million years ago.

The discovery of a rare dinosaur nest is not that unusual in the city of Héyuán, which has a population of three million inhabitants. There have been numerous finds of dinosaur fossils and especially eggs. According to the Sun, because of the discoveries, ‘Héyuán has become known as China’s “home of dinosaurs”.

The first major find of dinosaur eggs was in 1996, also near the Dong River, where the schoolboy made his find. In 2015 workmen laying sewage pipes found a batch of over 40 eggs. The Daily Mail reports that ‘‘more than 17,000 of them have been dug out in the city’’.

Over 10,000 of them are now stored or on display at the local Héyuán Museum. Its collection of fossilized prehistoric eggs is regarded as one of the most extensive anywhere in the world.

65-Million-Year-Old Triceratops Skull
Meanwhile in the United States, another significant dinosaur finding was made by a student this week. Harrison Duran, a college student at the University of California, who has been obsessed with dinosaurs since early childhood, discovered the partial skull of a 65 million-year-old triceratops at Hell Creek Formation in North Dakota. 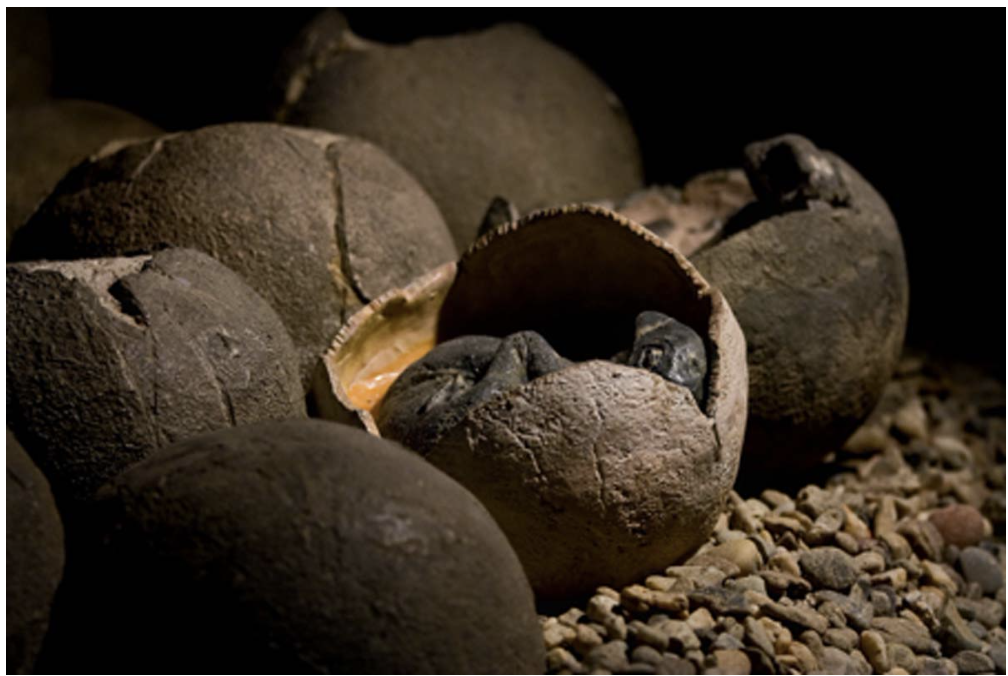 The Washington Post reports that a cast of the skull will be made and displayed at the university so Duran can share his discovery with the campus community.

Further Research on the Eggs
The researchers in China are now trying to determine which species of dinosaur laid the eggs, tens of millions of years ago. The remarkable find of a dinosaur nest will help experts to better understand the prehistoric creatures just prior to their extinction. One day, the young boy may have the satisfaction of seeing his discovery on display at the local museum.