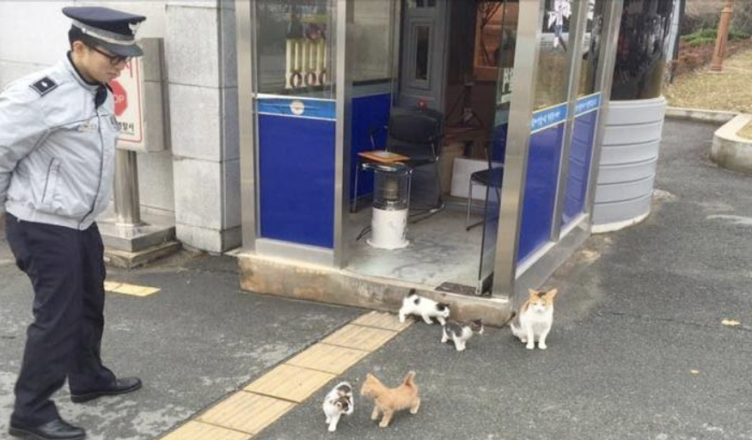 One day, a stray cat walked around a police station meowing to ask for help and decided to go home.

This beautiful calico cat must have felt that she had a connection with the officers of this police station in Pusan, South Korea, because a few months earlier, she had seen them bury her kittens who died in a road accident. When she came back, it was actually the same officers on duty and they soon realized that she was pregnant again.

The officers liked to have her around her and called her «Molang,» which means «don’t know.» They thought this name was appropriate because they had no idea how old she was or where she came from. When she was ready to give birth, the officers made her a «delivery room» under the sofa and even helped her cut the kittens’ umbilical cord. She had four kittens in all and the station has now become their permanent home.

Whenever a package arrives at the station, cats like to take a nap on them. This family of friendly cats works alongside the police and helps them in their work.

Everyone at the police station fell in love with this feline family and they became the mascots of the police station. They are very well cared for, well fed, have a lot of playing time and grow up in a loving environment. And it turns out that these charming kittens became the very first family of police cats in the country.