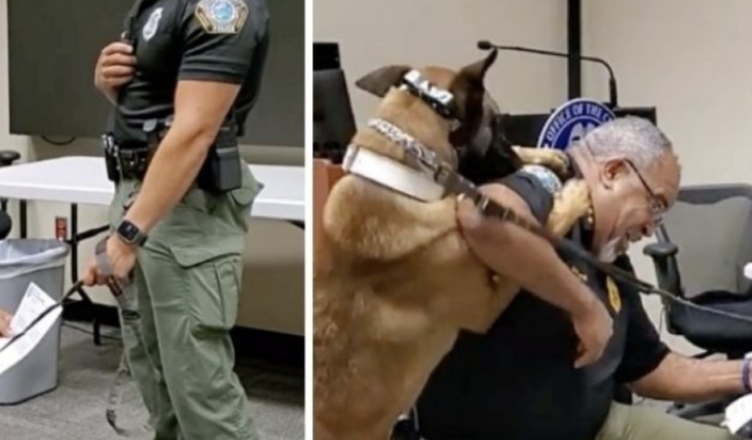 The new member of the law enforcing department has been undergoing months of training together with his human parter, Officer Garza.

They’ve been at it hard at Highland Canine Training, LLC in harmony, North Carolina.

The Belgian Malinois pup faced Chief of Police Battiste, where he had to kneel down while reciting a pledge to him. 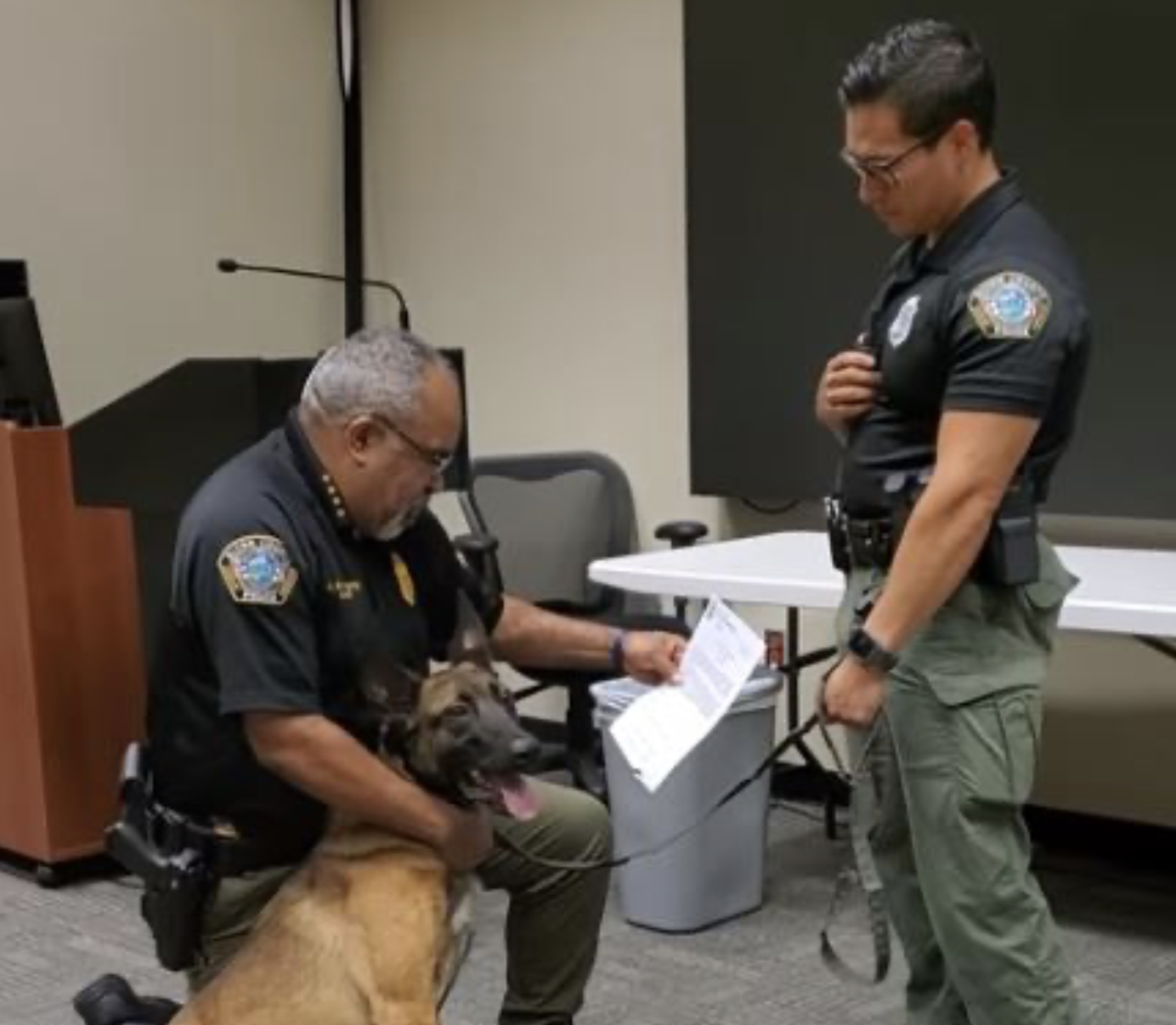 K9 Ghost could barely contain his excitement during his swearing in ceremony, and all you have to do is look at his adorable face.

How’s he going to intimidate crooks and criminals with those eyes?
“Repeat after me, Officer Ghost,” Chief Battiste tells the K9 Officer, “I, Ghost, do solemnly swear or affirm that I will uphold the Constitution of the United States.”

Now no one knows if Ghost was listening or not. He did begin smelling the document, probably sensing that this was it and he needed to be serious. But where are the treats? 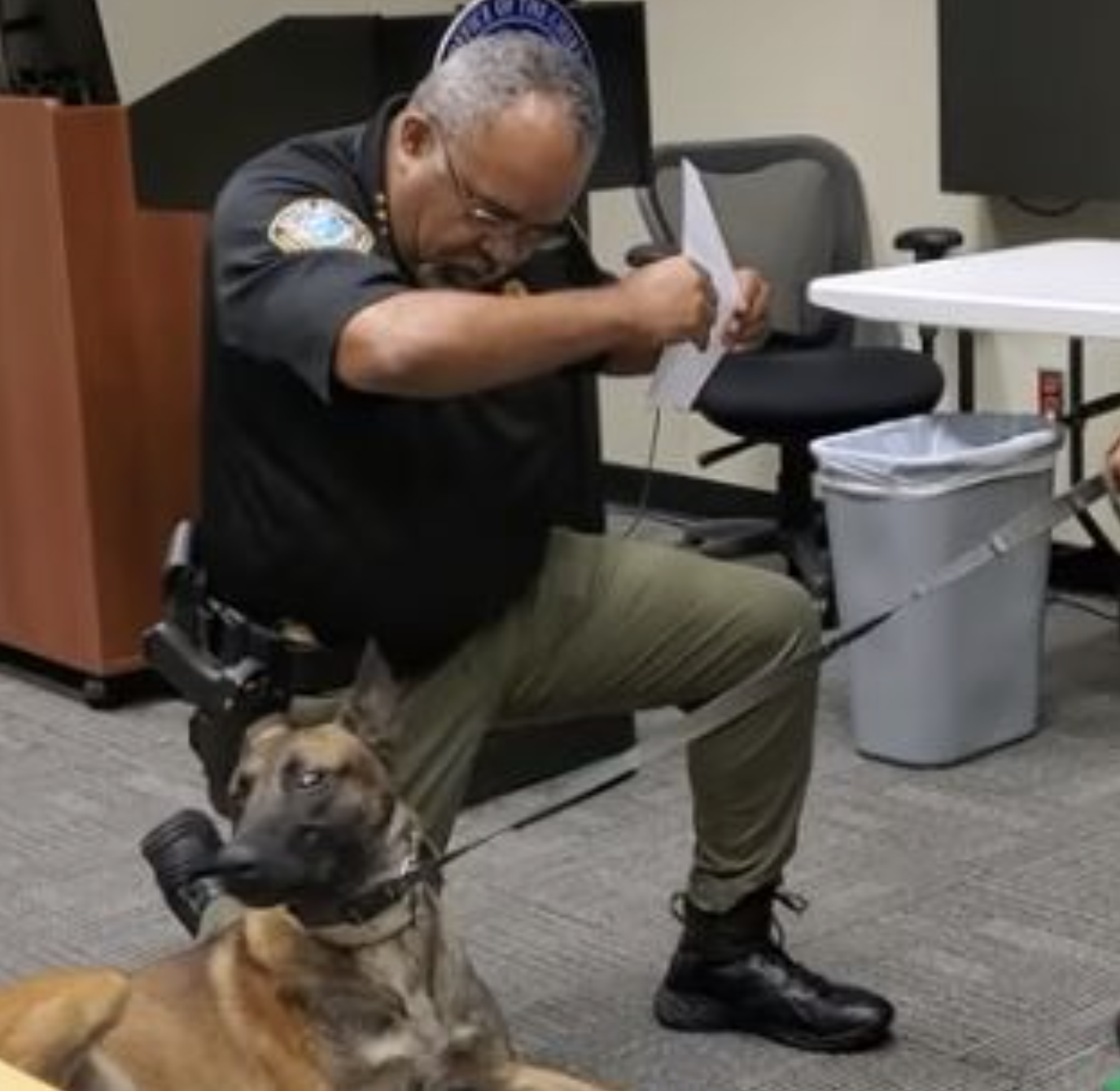 The pup goes ahead and reaches for the chief’s badge. It was dangling around his neck anyway. But like any excited pup, Ghost gets overly excited finally climbing all over him.

He is still very much a pup who just wants to play.

K9 Ghost even got on his back, looking up and expecting someone to rub his belly. He’s a very good boy!

“We expect great things from you, Ghost, including vanishing into thin air on command,” the Franklin County Sheriff’s Office said on Facebook.

Well that remains to be seen. 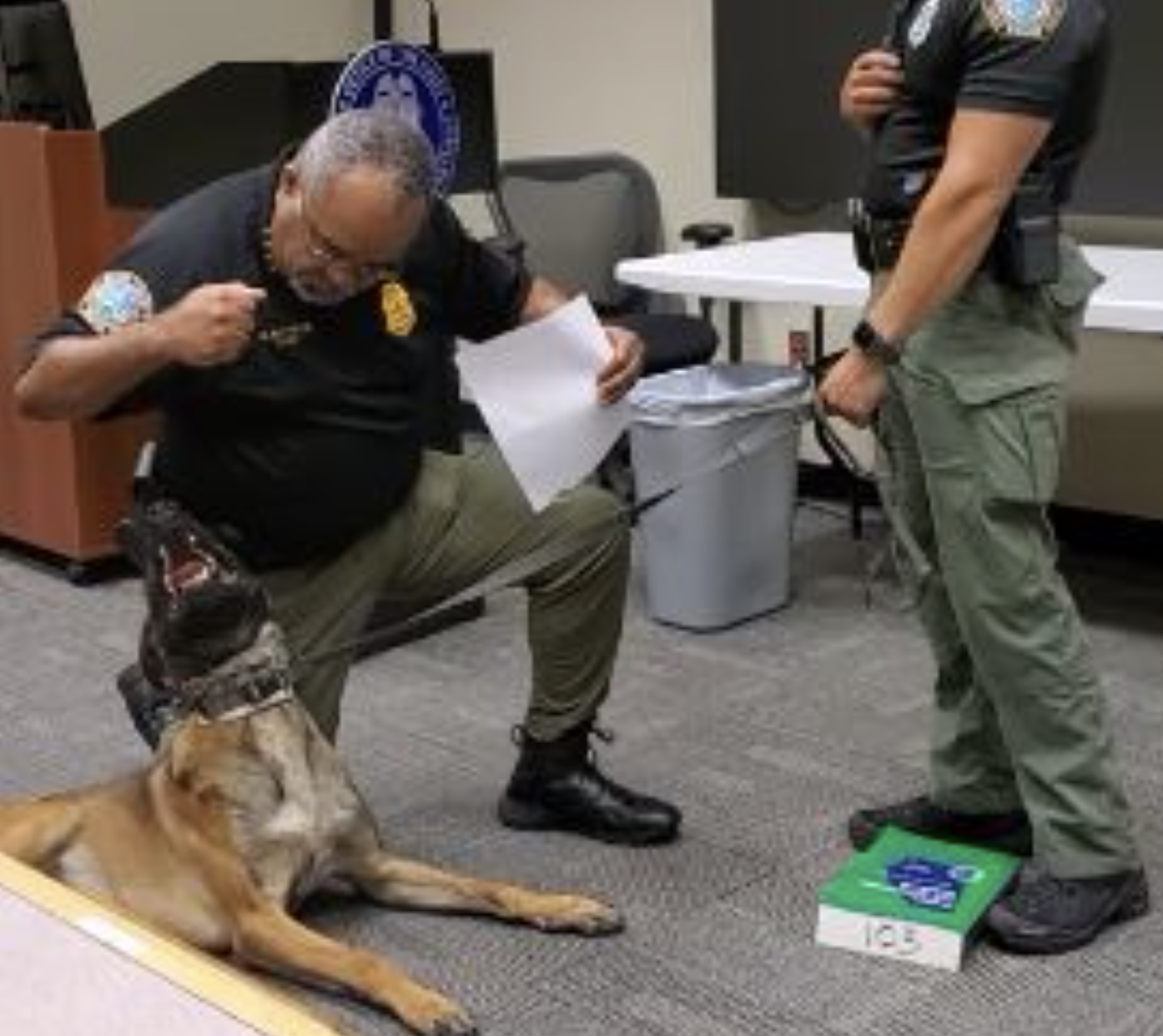 Battiste was certainly amused at the pup’s antics but he obviously didn’t mind. He did try his best to hold back his laughter as he needed to continue with the oath taking ceremony.

He did finally finish, so Battiste asked K9 Ghost to bark just to confirm that he understood the oath and everything that just happened. Ghost didn’t bark though.

Good thing there was another dog who barked on his behalf. These dogs look promising.
Ghost would rather chase the chief’s hand, acting silly and trying to play around with him. Let’s just hope that he gets into work mode when finally called to duty. 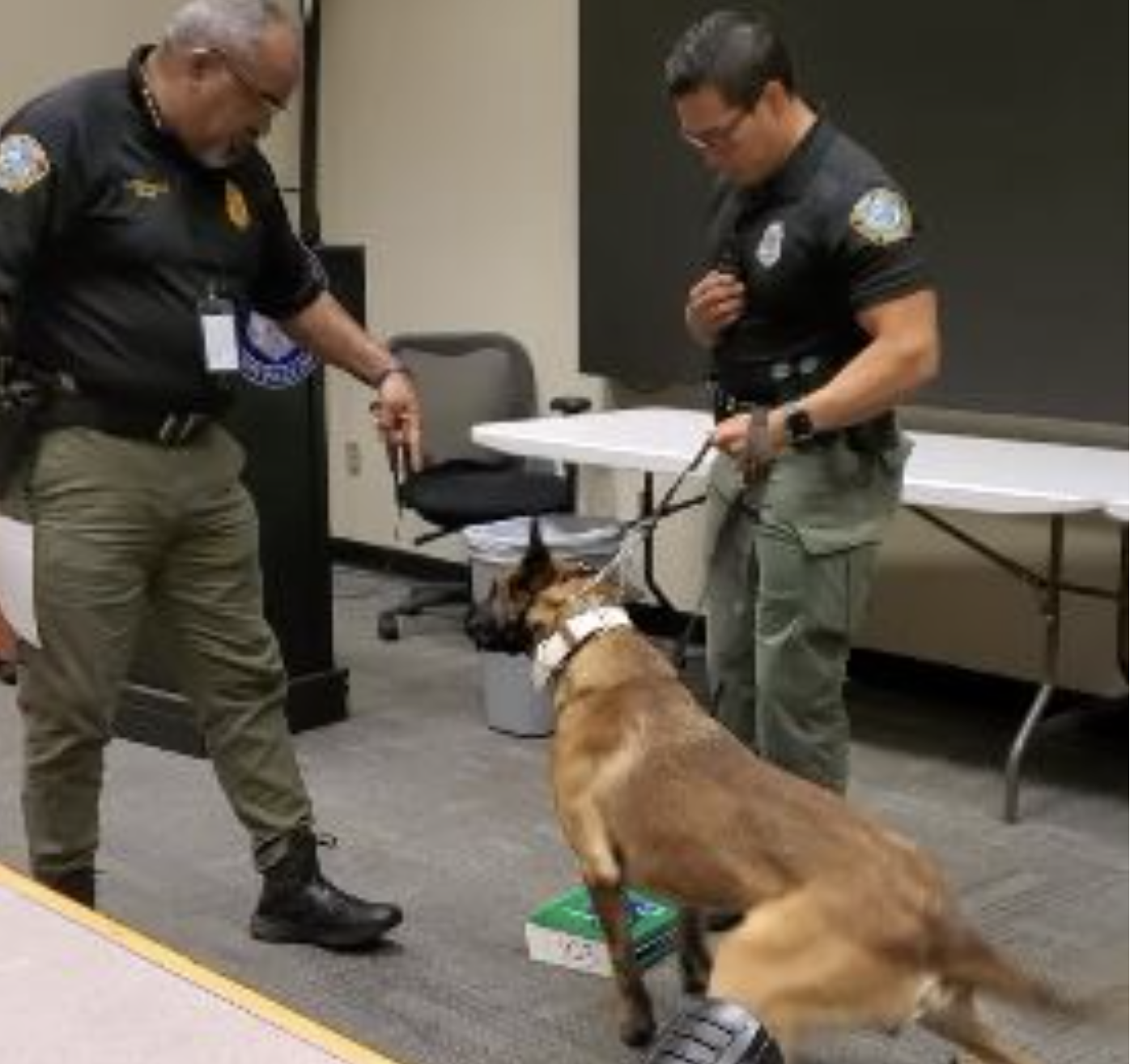 The community needs a tough furry boy.
Ghost is full of life. He’s got all the energy in the world which makes him seem to be young and goofy. But he did undergo extensive training so surely all that work is just waiting to be unleashed.
At the right moment, at the right time.

But give him all the confidence in the world. It’s a tough job in a tough world and Ghost is brave enough to take the challenges head on. So long as he gets belly rubs and treats. 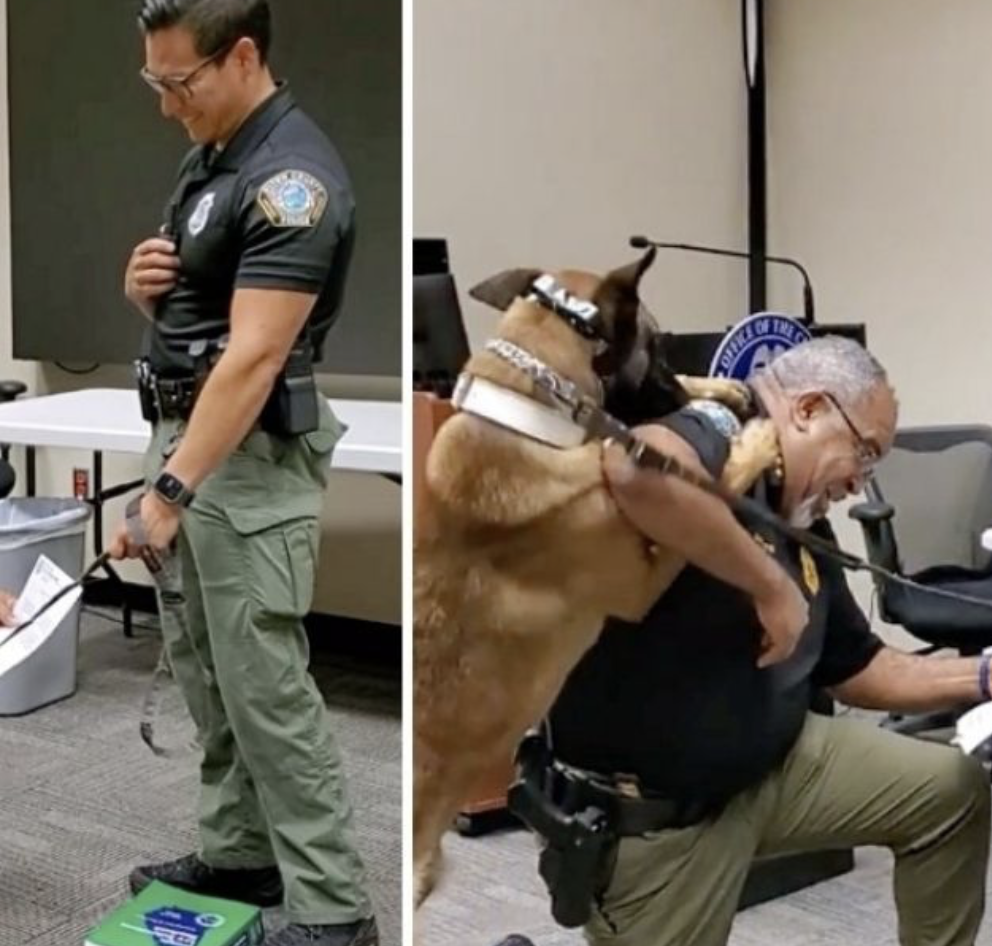 We’re all looking forward to seeing you patrol the streets and instill some fear and discipline when needed.

Watch Ghost’s hilarious swearing in ceremony in below!
Please SHARE this with your friends and family.