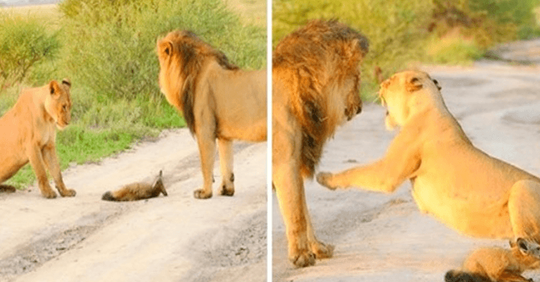 A rather unusual incident took place in the Central Kalahari Game Reserve in Botswana.

Photographer Graham Dyer captured a series of images showing the interrelationship and behavior between wild animals of the same species and different species in a new light. These images follow a troop of lions on a routine hunt. The pack stops when a lioness sees a wounded pup lying in the middle of the dirt road. The fox is in very poor condition with an injured spine and bruised hind legs. He desperately begs the powerful lioness to help him.

In a strange twist, the lioness’s maternal instincts manifest themselves and she decides to spare the little fox unable to defend herself. She stands next to the helpless fox and orders her cubs not to disturb him. But this decision is not well taken by the other members of the troupe. Soon, a fierce lion confronts the lioness about this unusual arrangement. He does not understand why it protects easy prey. But the kind lioness keeps her promise to protect the baby fox at all costs, even if it means fighting her own family.

The lion finally gives in to the lioness’s demands and leaves the fox alone. After a while, the fox makes an effort to get up and begins to head towards his house.

He bids farewell to his surrogate mother and disappears into the desert. We are totally overwhelmed by this extraordinary act of the merciful lioness!

Click on the video below to see how the generous lioness stood there and defended the injured fox against all odds!