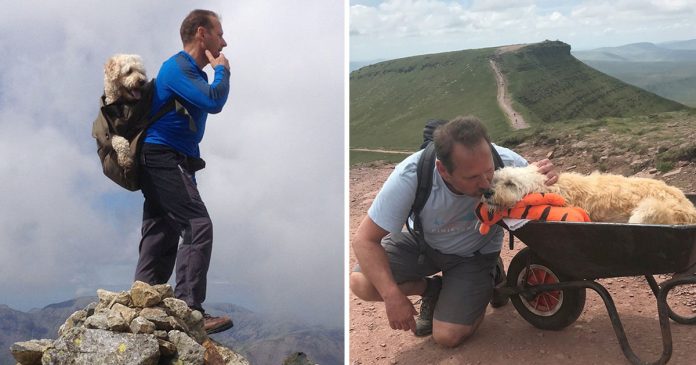 A man takes his sick dog in a wheelbarrow for one last walk on his favourite mountain, located in the Brecon Beacons range in Wales.

Carlos Fresco and his 10-year-old Labradoodle named Monty, used to hike in different mountains of the place, they had even reached the top several times.

When the man learned that Monty didn’t have many days to live, he decided to go on one last adventure with him. 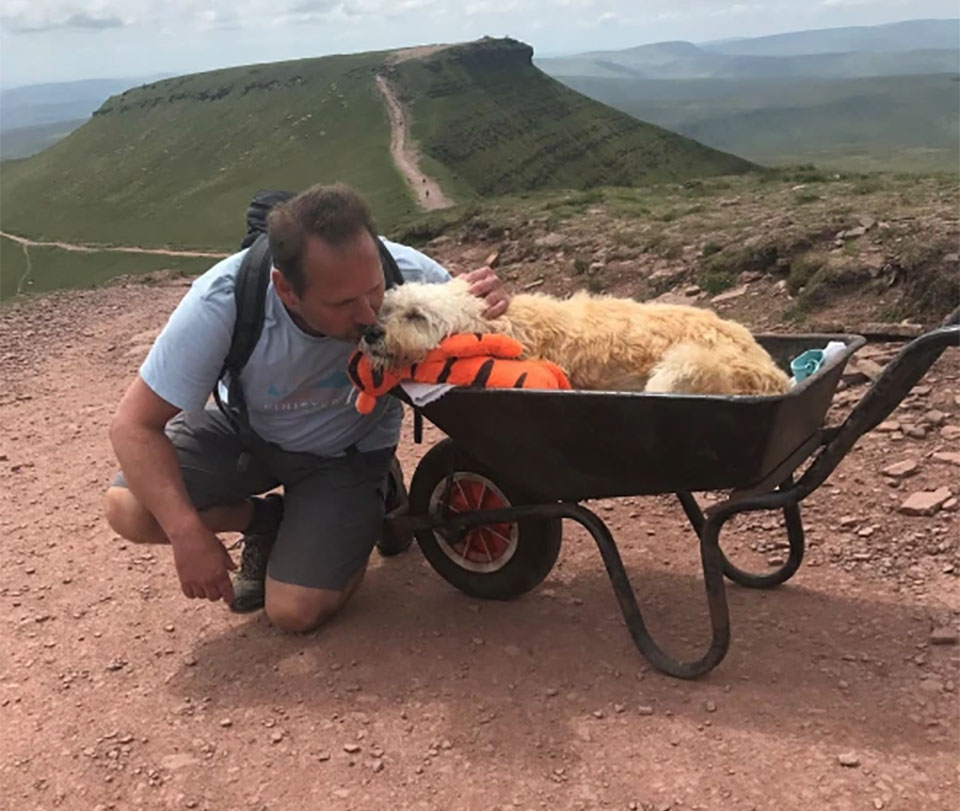 Carlos has shared life with Monty since he was a little puppy and since then the couple went on hundreds of adventures along the hills of the UK.

Man takes his sick dog to live one last adventure

Sadly, 18 months ago, Monty was diagnosed with cancer and Carlos realized he had to enjoy the last few days with his dog.

«At first, Monty responded well to chemotherapy, but unfortunately the leukemia returned several weeks ago and began to fade rapidly.» 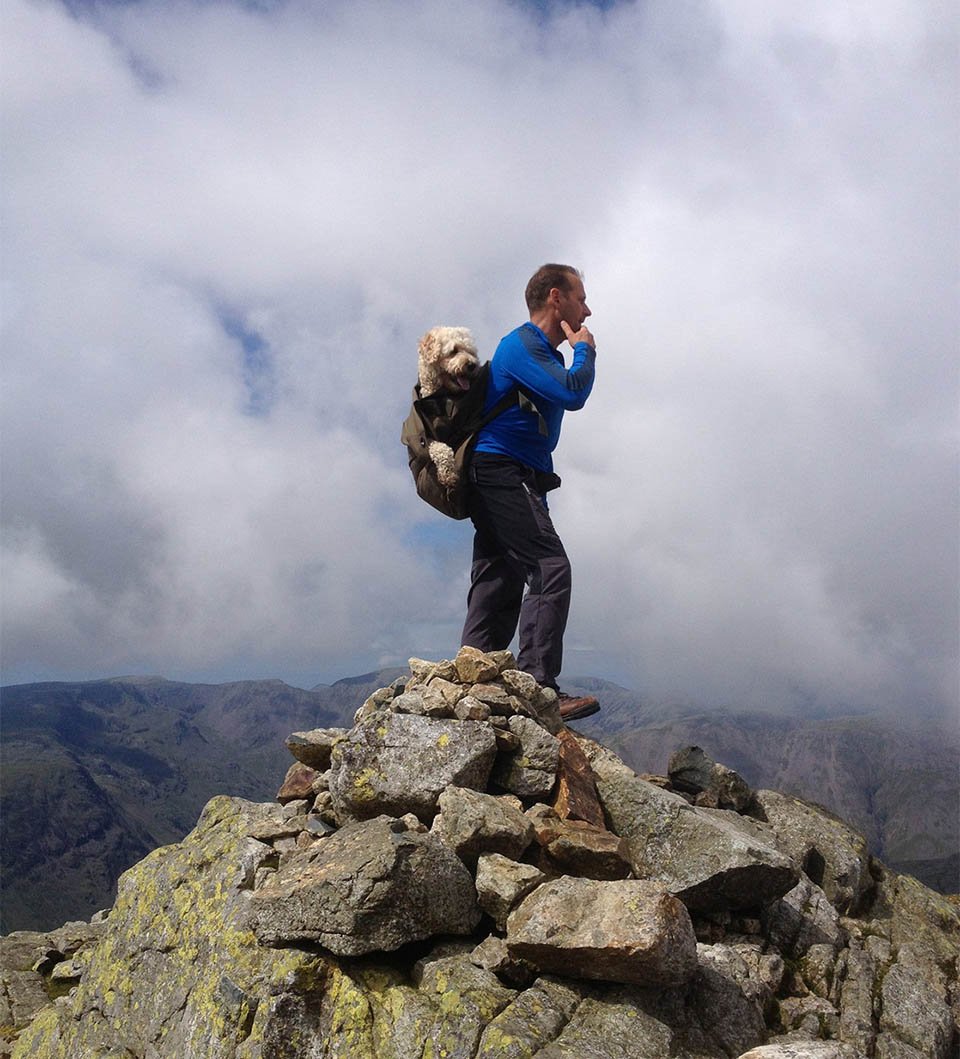 The London-based couple at the time thought it was the end of their adventures, but Carlos wanted his friend to have a final journey.

A friend of Carlos who lives in Brecon had a health problem and had to return from London, to be treated medically, so Carlos offered to take him and saw this event as a sign to take a last walk with Monty, and took him with him. 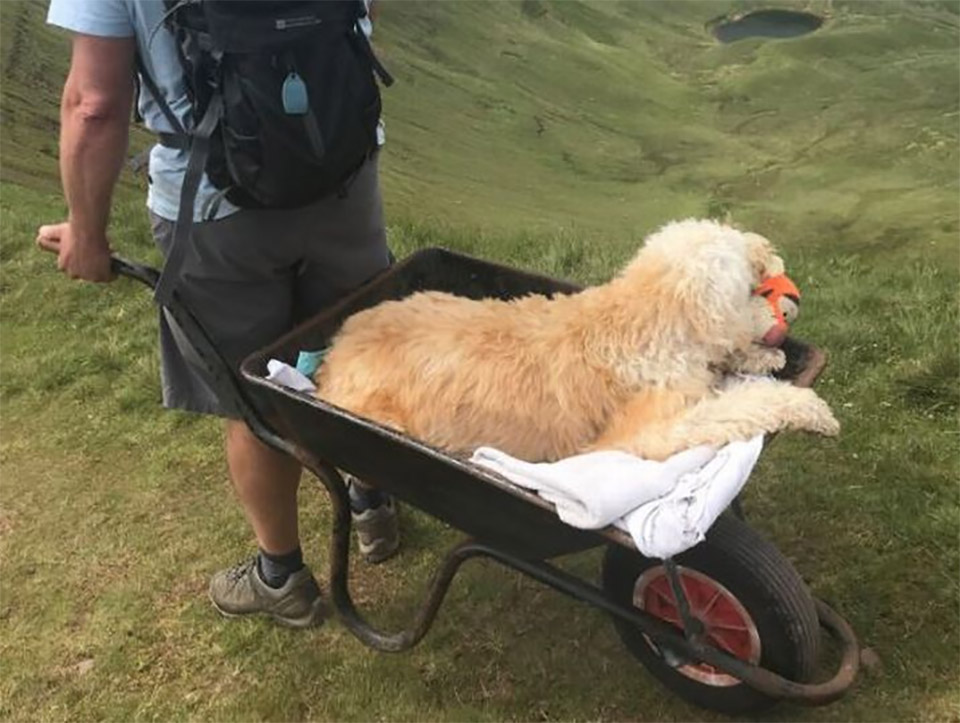 «We ended up staying there for a week and Monty loved having a big back garden to stretch out to, which is where I stumbled upon an old, rusty wheelbarrow that I decided to dust off and grease.»

After seeing the wheelbarrow, Carlos came up with the idea of taking Monty to his favorite mountain, Mount Pen and Fan. So the next morning, Carlos boarded Monty in the wheelbarrow and began his journey to the top of the mountain. 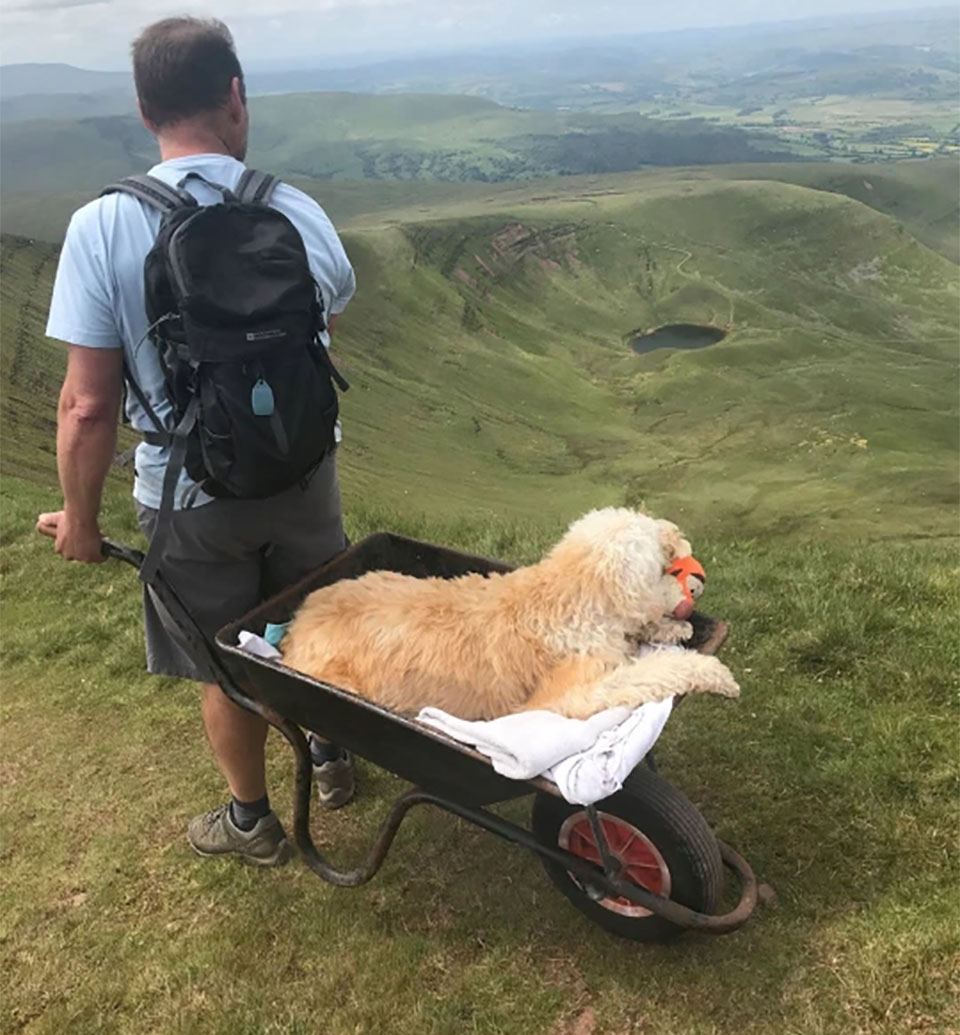 The puppy’s reaction was remarkable and incredible, he was very happy to see the beautiful landscapes and meet other walkers.

Monty has always been very kind and loves to meet people, so everyone who approached was moved by her story.

People were so shocked by Carlos’ gesture, that they offered to help push the wheelbarrow to the top, they were really amazed. 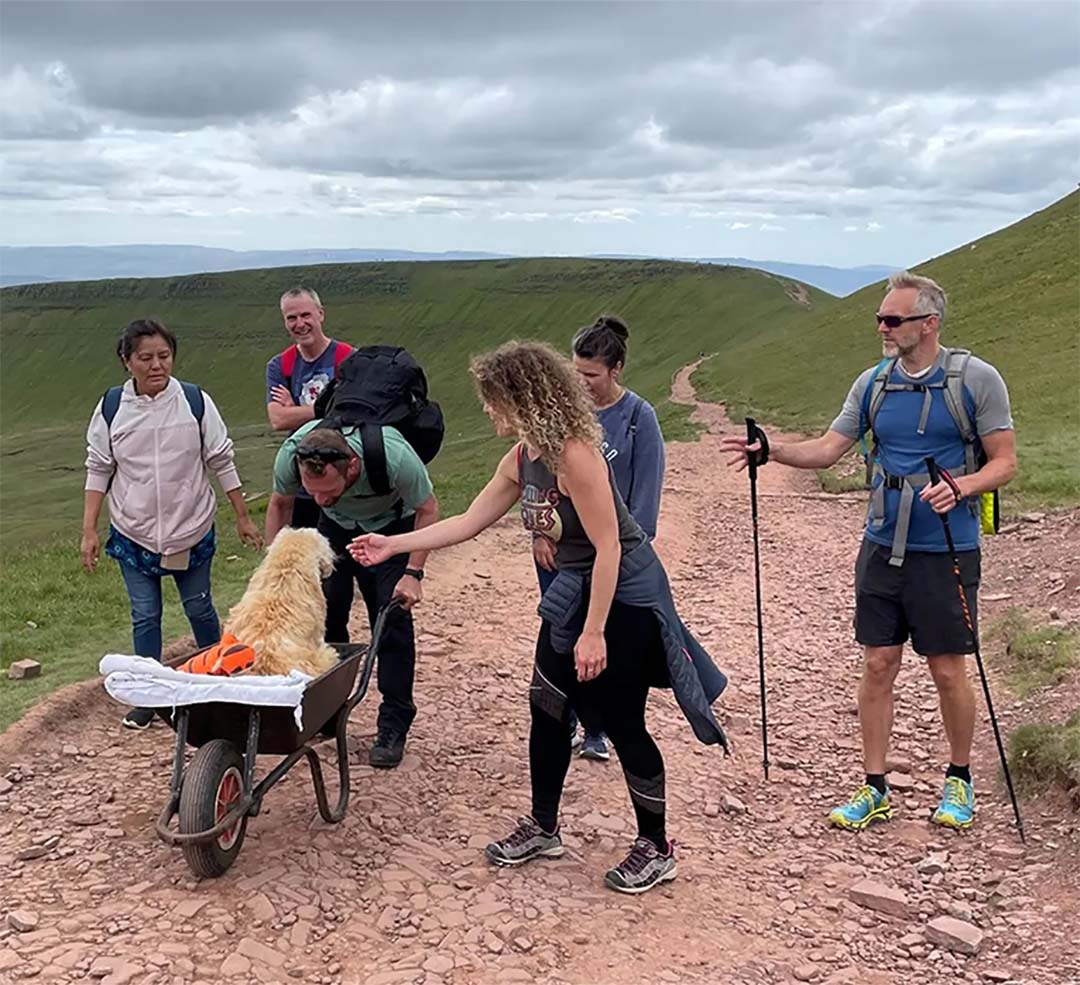 «To be honest, I was amazed by the kindness they showed us: strangers took the time to say ‘hello’ and lend a hand to get him to the top.»

After enjoying the panorama, Carlos and Monty, finally reached the top with the help of people and took the opportunity to photograph the beautiful moment.

Even though Monty was weak and couldn’t walk, he really enjoyed the attention he received from all the people who helped him. 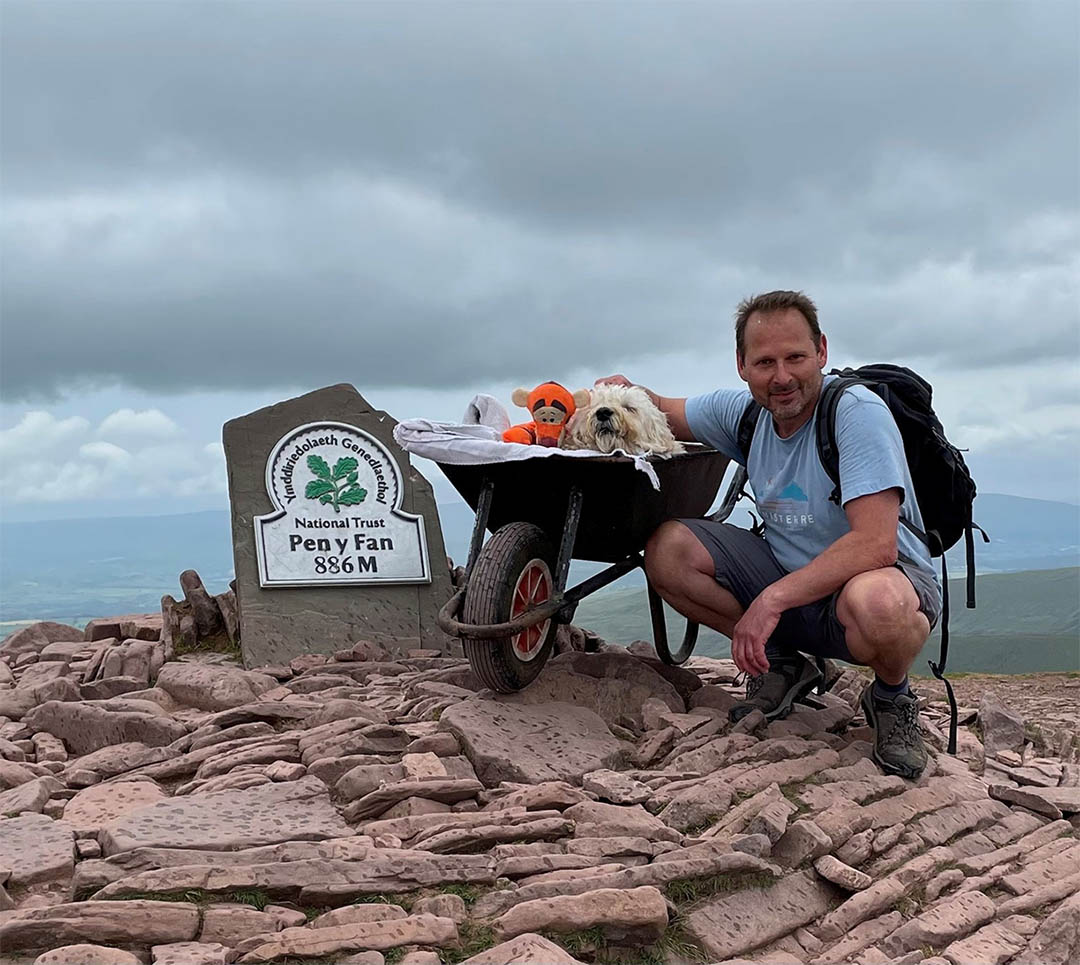 People were completely happy to have collaborated on Monty’s last crossing, but at the same time they were saddened by his state of health.

Unfortunately, Monty’s health continued to deteriorate during his stay at Brecon, and after a few days he passed away at Carlos’ feet. 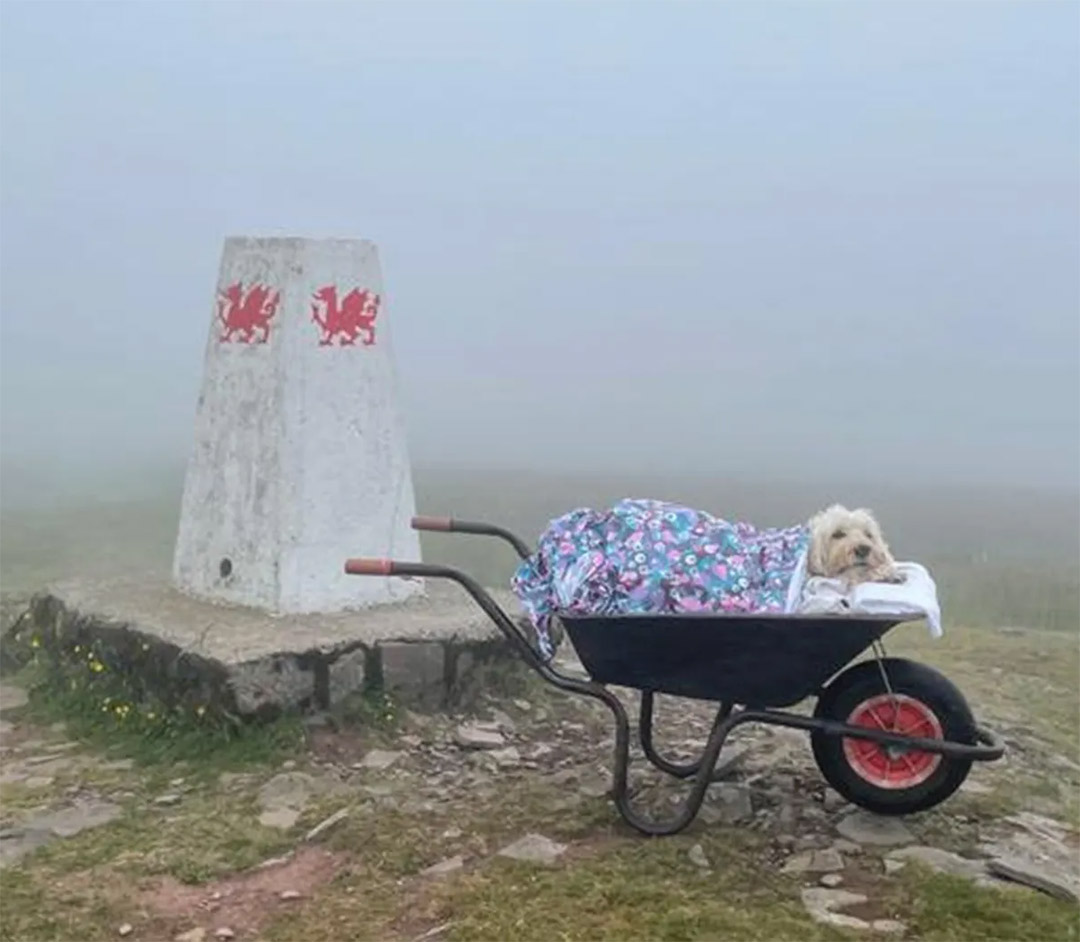 «He endured until the morning after Father’s Day. I looked over the mattress and it was gone. However, it looked so calm and I’m glad we went on one last adventure together.»

The man took Monty to his home in London and decided to bury him in the Garden, after all, it will always be part of his life.