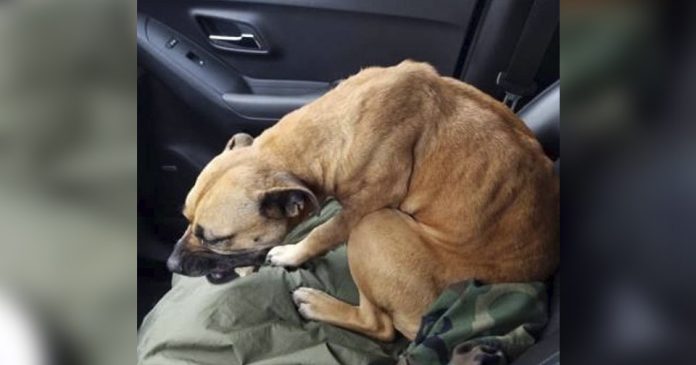 A homeless dog finds the door of an open car and decides to jump inside it, in order to find help, and ends up being adopted.

A man named Bill Shaver, went fishing without thinking that this trip would change his life when he met his new rescue dog.

After spending time fishing in Arkansas, Bill was on his way back to his residence in Missouri, when he decided to stop at a rest stop.

Since he knew it was only going to take a few minutes, to rest, stretch, get into the bathroom and get the garbage out of his car quickly; he decided to leave the car door open and the engine running. 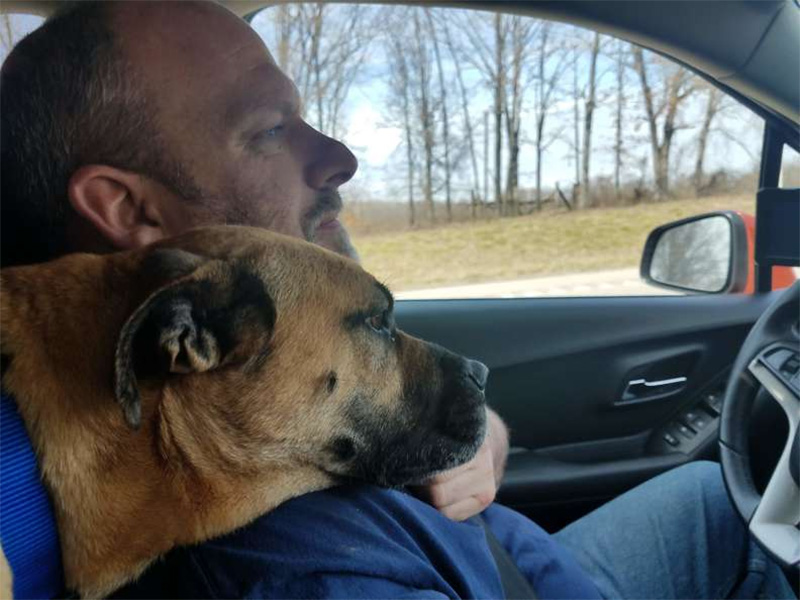 When he got back in his car, he found an incredible surprise in the front passenger seat. A homeless dog was sitting there.

Bill looked closely at the dog and realized that she was very abandoned, it was nothing but skin and bones, she was clearly hungry. So Bill offered her the only thing he had of food at the time; a Rice Krispie bar.

The dog devoured the snack quickly and curled up in the seat, which made it clear that the poor animal was looking for urgent help. 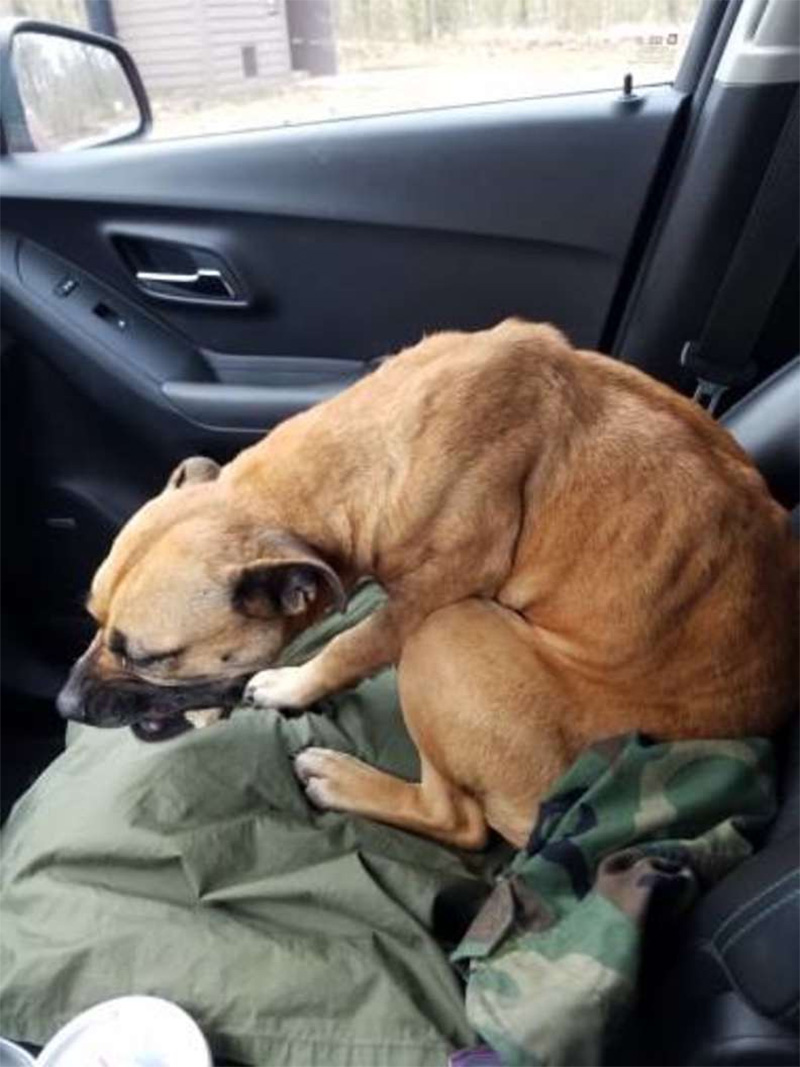 Homeless dog goes up
At that moment, Bill knew he had to do something, he couldn’t leave her there, and there was no way to push that sweet little face away.

Without much thought, Bill knew that the right thing to do was to take her home with him, because finally the dog had found the right help.

Bill and his wife usually help by taking in homeless and needy animals, so this situation was not strange to them.

It was evident that the dog had no family and no sign that she was lost, so Bill sent a message to his wife with the photo of his new travel companion. 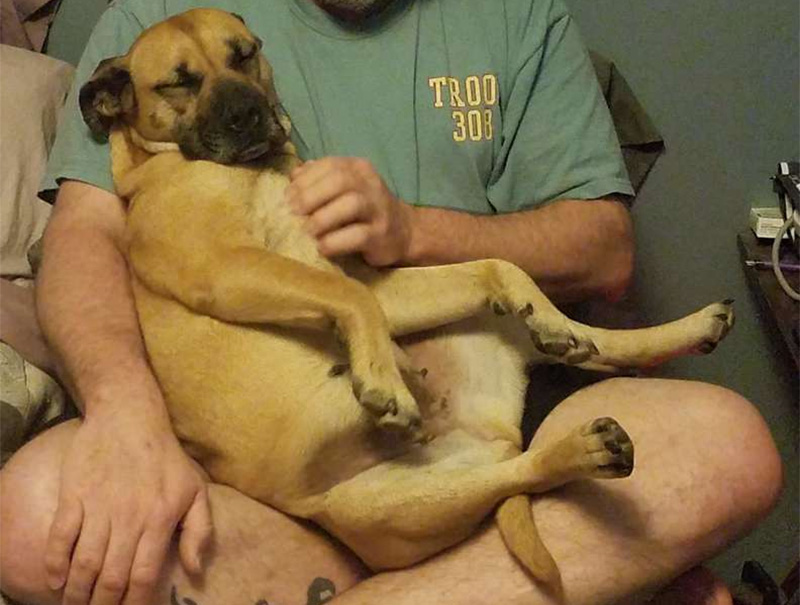 Sleeping River
When his wife, Angela, received the message, she agreed with Bill’s decision and said she was ready to receive it with love.

«I asked him what our new pet’s name was. We decided to call her River after the place where he found her.»

When Bill got home, Angela and her son went out to greet their new pet, but River refused to get out of the car.

River wasn’t afraid of her new family, but she seemed to feel safe in the car; probably because it was one of the first places where he had received help. 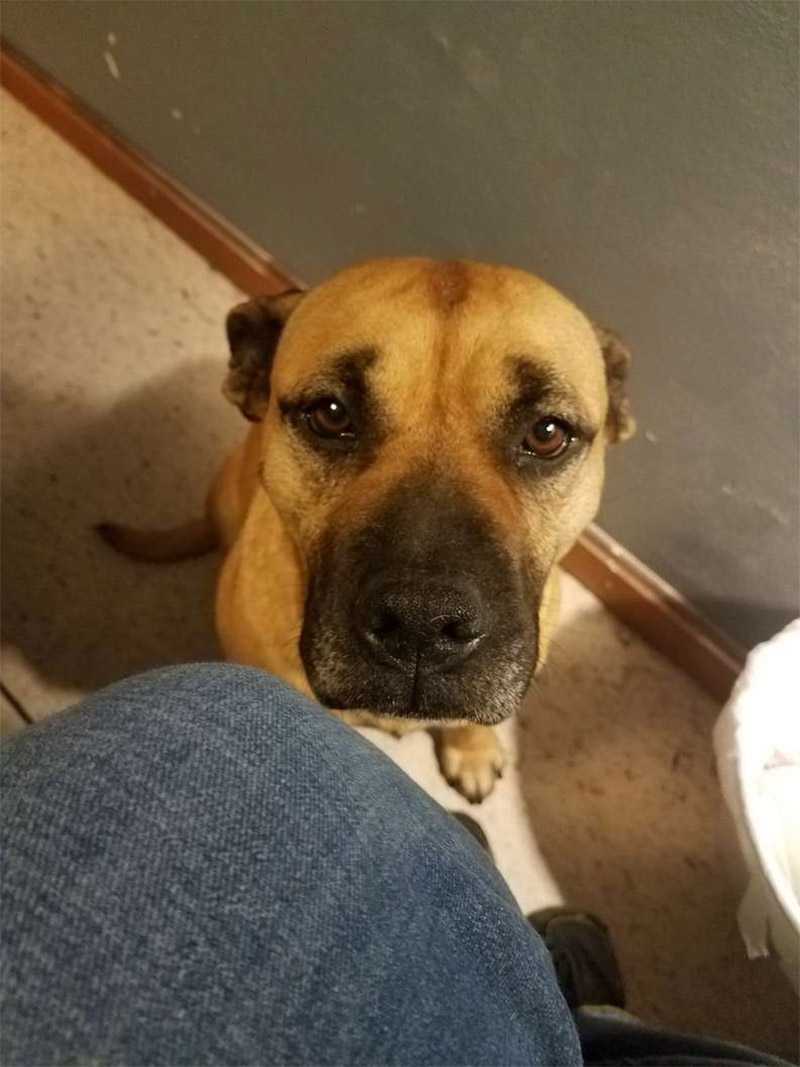 After spending some time in the car, Bill decided it was time to meet the whole family, including his doggy brothers.

Bill pulled her out of the car and took her to meet her new siblings individually, so she wouldn’t feel too overwhelmed.

The family had three dogs and a cat, all of them had been rescued from the streets and were happy to add one more.

Sleepy homeless dog
When River felt a little confident and met each of the family members, it was time for the bath.

«Once everyone decided she was fine, Bill took her to take a bath. It was covered in mud, blood and ticks. After he dried up and a few ticks were taken out, he got a good meal. 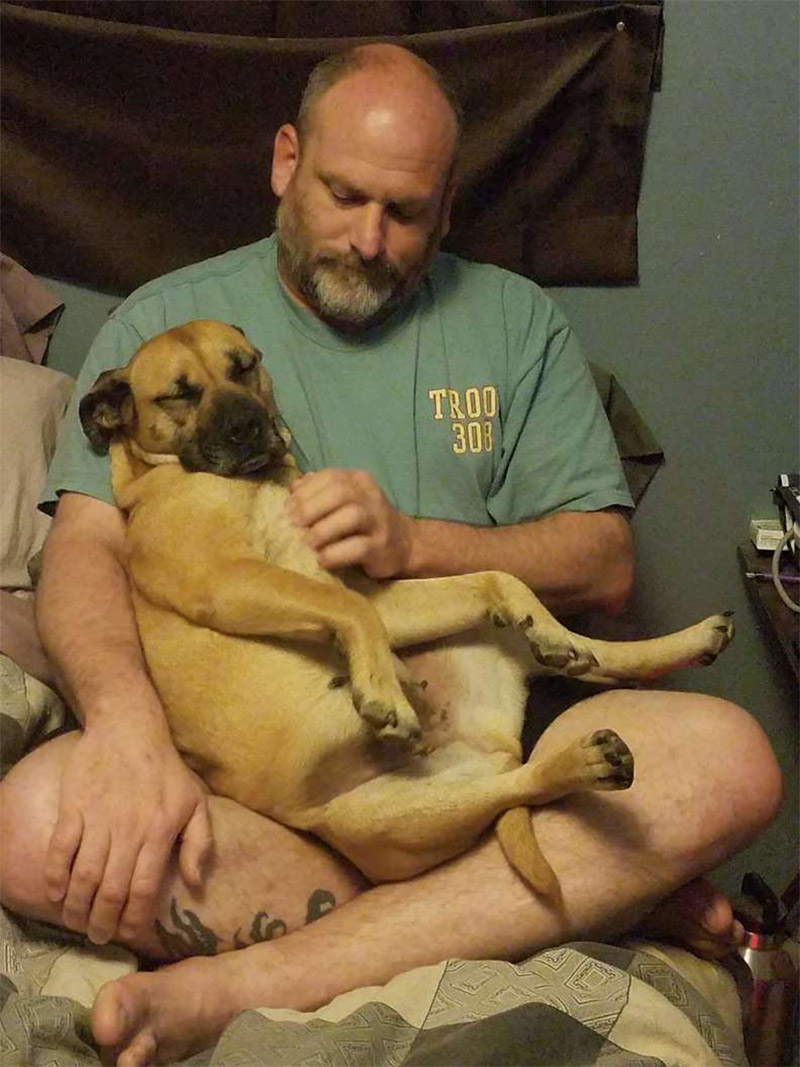 Bill made her a bed on the floor of our room next to the heater. She slept there all night.»

River woke up the next morning with more encouragement and decided to explore very carefully, all the places in his new home. He began to adjust to his new home and ran in the yard with his new siblings, but never separated too much from his parents. 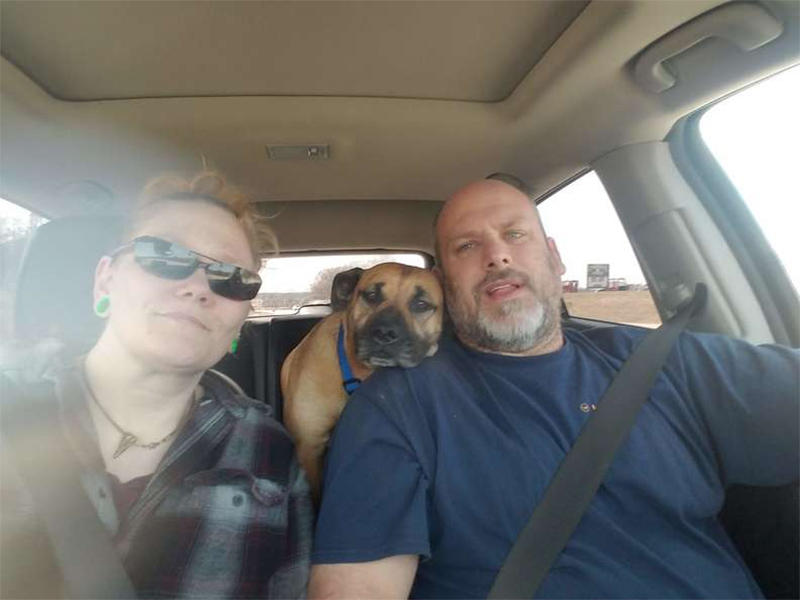 She was slowly coming to terms with her new life, but the family noticed that it was no stranger to her, so they deduced that she might have had a family before she ended up on the streets.

Although it was very evident that the dog had already had family, on the first night in her new house she had a small accident. 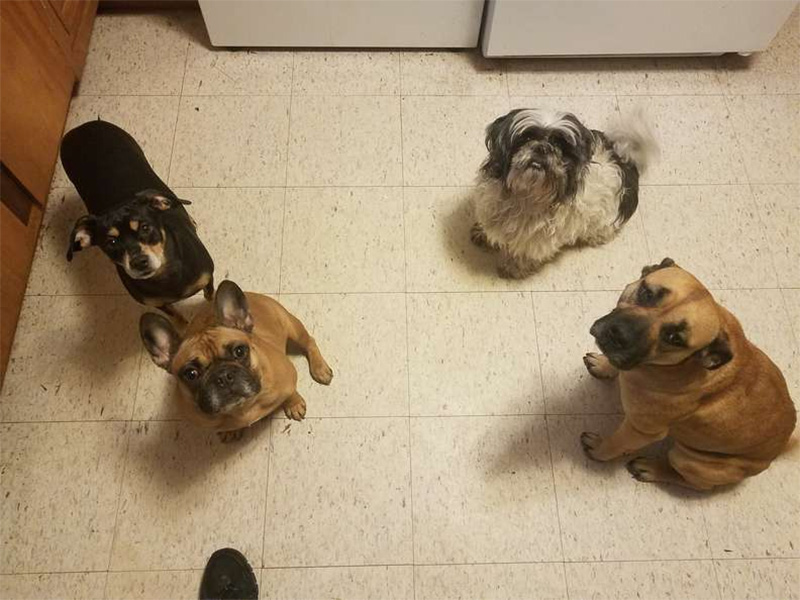 «We had an accident in the house the first night. But the incident was near the door. I had to go out, but I didn’t know how to tell us.»

A trip to the vet revealed that the dog had parasites, suffered from heartworm, wounds to her neck and face, indicating that she had been in a fight.

Despite this, the sweet dog sat patiently while the veterinarian supplied the medicines and the corresponding treatment for her wounds.

Analyzing her good behavior, it was more than clear that River was very grateful to have a new family and to be safe. 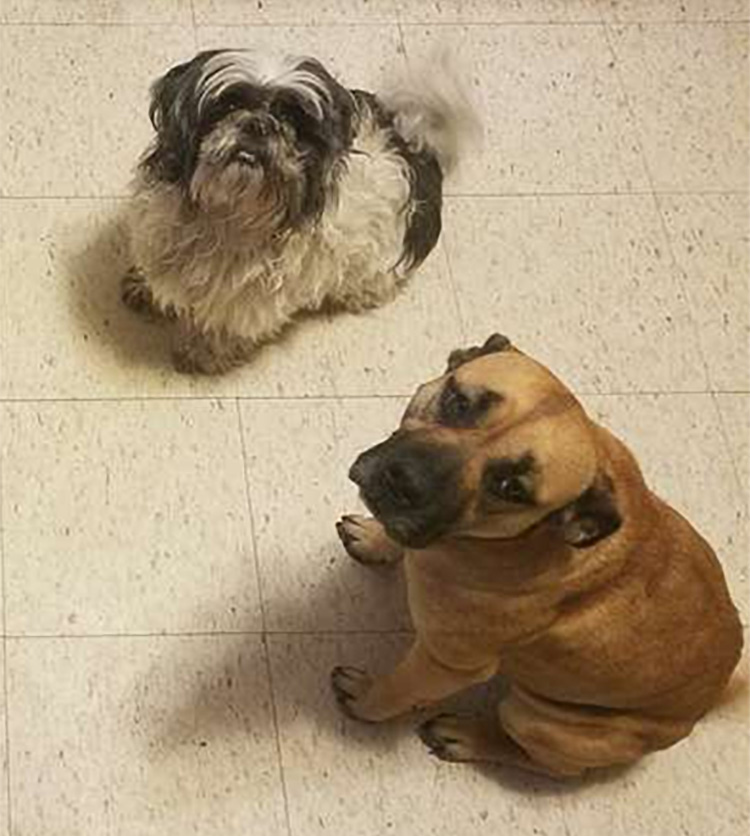 Little by little he has advanced and his confidence increased, although at first he had a hard time.

«She runs in the yard and chases nothing with Winston, sits down to eat cookies with Ginger and hoards the bed with Butters. The cat was unfriendly for the first few days, but he’s finally accepting her.»

When River decided to get in that car that day, it was an act of fate and although he did not know what would happen, fortunately his life changed forever.